We Believe Survivors of Canadian Mining

Join IPSMO, OPIRG Ottawa, and ProtestBarrick as we take an international, national, and very personal look at violence against women, as we find solidarity in the similarity of these struggles.

After years of denying cases of sexual assault, Canadian mining company Barrick Gold compensated 119 women and girls who were victims of sexual violence by mine security in Papua New Guinea to the tune of ~$10,000 each for these abuses, but had them sign an agreement that they could never sue the company. Eleven of the women refused this remedy package and threatened to sue the company, resulting in a higher out of court settlement. Since that time, the 119 women who originally accepted the money from Barrick have organized into women’s groups and started to demand more dignified treatment from the company. Many others have never received any compensation at all, as allegations of sexual violence continue.

Closer to home, the issue of Missing and Murdered Indigenous Women has gained national and international attention due to the efforts of native women’s organizing and documentation efforts. These grassroots efforts have challenged official reports about the numbers of women who have disappeared, and created support and community for families and survivors of gendered violence.

From gaslighting tactics, to the cultural and legal barriers that prevent women from sharing their stories, we will look at the systemic forces that work to silence victims of abuse. We will also hear from courageous women who have self-organized with other survivors to tell their stories and demand accountability.

Special event Wednesday 7pm at Bronson Centre in Ottawa and livestream online – an evening to celebrate and support Indigenous land defence – and serving as a fundraiser for the Algonquins of Barriere Lake land defenders camp, established this fall to protect their territory from mining. 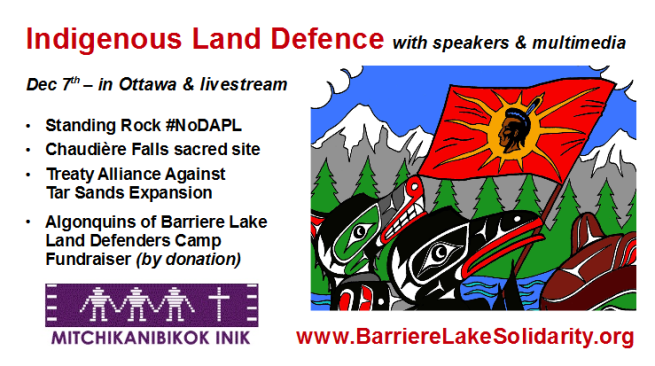 ** Indigenous Land Defence : An evening of speakers and multimedia **

This event will be raising funds for the Algonquins of Barriere Lake land defence efforts – all levels of donations are welcome.

Childcare is planned to be available on site.
Event contact: org4justice@gmail.com
Background info: www.BarriereLakeSolidarity.org
Dec 7 event post: http://ipsmo.wordpress.com
Livestream info (embed or link) will be at the two above websites before Wednesday 7pm.

**** Support Barriere Lake via paypal even if you don’t attend in person ****
https://www.paypal.com/cgi-bin/webscr?cmd=_s-xclick&hosted_button_id=JU3W8CQVB5Y2A

Please join us this Tuesday to gather together for a dinner and opportunity to hear from Barriere Lake community members about their new efforts to prevent mining in their territory, and how you can support these efforts.

In late October, the Algonquins of Barriere Lake set up a camp to defend their territory from new threats of the various companies that have mining claims there. The Quebec government has recently begun unilaterally lifting multi-year moratoriums on mining in the area, despite this being against the Trilateral and Bilateral Agreements of the 1990s.
More info: http://www.barrierelakesolidarity.org/
http://www.greenpeace.org/canada/en/blog/Blogentry/mining-without-consent-of-the-algonquins-of-b/blog/57914/

Tuesday, November 8th 2016
5pm – 7pm  (come as you can, even if not right at 5pm)
at St. John’s Church, 154 Somerset St W. (corner of Elgin)
– Basement hall: entrance off of Somerset, wheelchair accessible entrance ramp off of Elgin.

Due to too short notice, we have not arranged ASL sign language interpretation. Please contact us with any other questions about accessibility or otherwise: indigsol@riseup.net

All levels of donations accepted – to go to maintaining the camp and for gas for travel monitoring the various areas of the territory where drilling/mining companies may start work. By cash or cheque. Donations are also accepted via paypal.

This event has been very quickly organized so we need your help to please get the word out and encourage your fam/friends/comrades/networks to show up. The land defenders camp has just been started within the last two weeks, and this fundraising dinner is timed to coincide with the “Joining Our Fires: Women for the Protection of Lands and Waters” rally happening directly afterwards at 7pm, at the Human Rights Monument (Elgin at Lisgar: 3 blocks from our venue).

Canadian Mining and Indigenous Self-Determination:
Perspectives from Panama and Ontario

Celestino Mariano Gallardo Gallardo is Chief of the Nidrini region of the indigenous Ngäbe-Buglé comarca, or special admininstrative area, in Panama. In 2011, in the wake of violent repression and after years of struggle, the Ngäbe-Buglé won a law to protect their comarca and Cerro Colorado in Western Panama from mining development. Celestino will talk about their struggle and Canadian industry involvement as a catalyst of conflict.

Robert Lovelace is an adjunct lecturer at Queen’s University in the Department of Global Development Studies, an activist in anti-colonial struggles and a retired chief of the Ardoch Algonquin First Nation. He lives in the Algonquin highlands at Eel Lake in the traditional Ardoch territory, has travelled to Ecuador and Bolivia, and speaks widely about the impacts of Canadian mining on Indigenous peoples.

Event presented by MiningWatch Canada, Territorio Libre, the Indigenous Peoples Solidarity Movement Ottawa (IPSMO) and the Latin American Law Students Association (LALSA) and the School of Political Studies at the University of Ottawa

Dear friends and supporters of the Algonquins of Barriere Lake,

Since the great outpouring of support at the Ottawa demonstration in December (http://bit.ly/f7abMo) against the imposition of the Indian Act on their community, a great many of things have transpired on Barriere Lake’s territory. Stronger than ever, the community is ready to fight back and needs your help.

Please read the update posted below and stay tuned for ways to get involved. Contained herein are:

1. MINING ALERT ON ALGONQUIN TERRITORY
2. REPORT ON THE ACTIVITIES OF THE INDIAN ACT BAND COUNCIL
3. REPORT ON SECTION 74 LETTER-WRITING CAMPAIGN 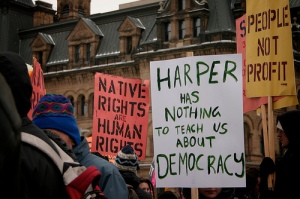 RAPID LAKE, QC – Last week, Barriere Lake community members discovered that Val D’ Or based Cartier Resources has begun line-cutting in preparation for mining exploration on their unceded Ab- original lands. According to their website, the mining company claims that their “100% owned” land base of 439 square kilometers boasts rich copper deposits ripe for exploitation.

The so-called “Rivière Doré Project” was undertaken without obtaining the community’s free, prior, and informed consent – the minimum standards set out in the United Nations Declaration on the Rights of Indigenous People (UNDRIP), which Canada has endorsed in words but not in action. The mining project also violates the community’s own environmental protection regime, the Trilateral Agreement, which was signed in 1991 by Barriere Lake, Quebec, and Canada and has yet to be honoured.

The workers on site, predominantly Crees from the Mistassini and Oujebougamou First Nations, agreed to leave when the Algonquins traveled to the proposed mine location and explained their opposition to the development. The larger battle with the Cartier Resources, however, looms ahead.

2. REPORT ON THE ACTIVITIES OF THE INDIAN ACT BAND COUNCIL

The community remains largely in the dark concerning the activities of the band council. Illegitimate in the eyes of most people in the community, this band council rose to power through the imposition of an Indian Act provision (Section 74) that gives the Minister of Indian Affairs discretion to overthrow Indigenous customary government systems. 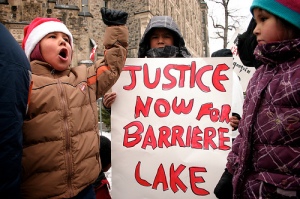 One thing is clear, though: Barriere Lake is open for business now. Mining companies, logging companies, and costly Hydro electrification and reserve housing development have all been green-lighted by the band council.

While investments in reserve infrastructure are badly needed, they are coming at the price of burying the larger issue of land management of the whole territory.

Hundreds of letters have been sent through the Barriere Lake Solidarity website to Minister of Indian Affairs John Duncan in protest of the forced imposition of Section 74 on the Algonquins of Barriere Lake (see http://www.barrierelakesolidarity.org/2008/03/donations.html). The Department has recently sent out replies to these letters which are telling of Canada’s communications strategy to contain the threat of public awareness on the issue.

Responding to these letters is Pierre Nepton, the Director General of the Quebec Region of Indian and Northern Affairs Canada (INAC). Nepton outlines the “official” story in his response letter: INAC had no choice but to reluctantly impose Section 74 due to internal conflicts over governance, which the community failed to resolve themselves.

But it’s cool. Barriere Lake Solidarity has prepared a forensic decoder of the government’s official story. We’ve drawn up a chart for easy comparison. 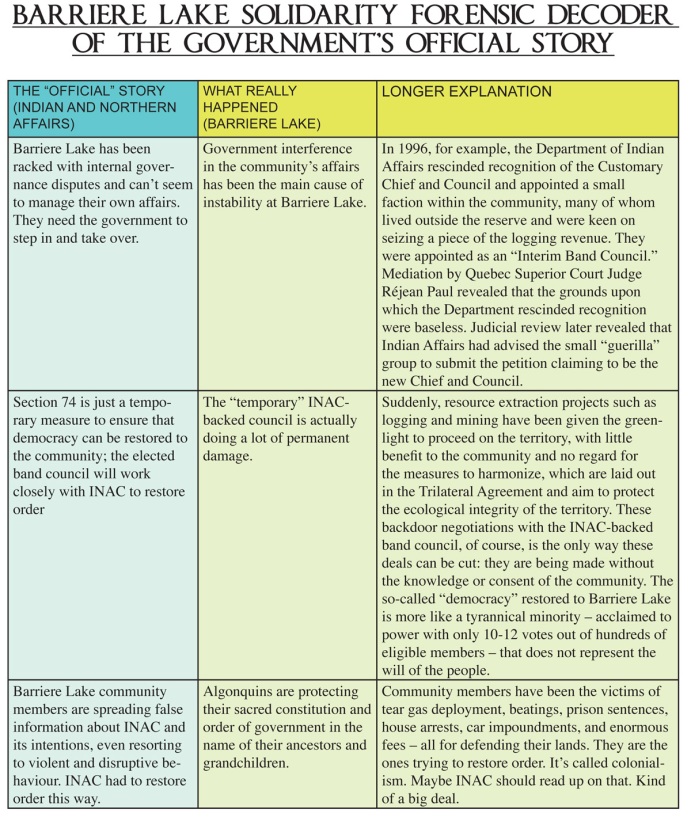 Throughout the colonial era and through to today, mining companies have enjoyed government sanctioned and un-fettered access to indigenous territories around the world. Canadian companies are currently at the fore of efforts to mine indigenous territories here in Canada and throughout the global south. This presentation will examine three examples of Canadian mining interests infringing on indigenous territories and how communities are reacting: the proposed mine in Tsilhqot’in Territory (Central BC) that would destroy Fish Lake; the Ring of Fire where despite their interest in potential mineral developments the rights of Cree communities are not being respected; and the Goldcorp mine in Guatemala where local communities have suffered water contamination and organized community referenda against mining in their communities.

Ramsey Hart is the Canada Program Coordinator for MiningWatch Canada. He works with mining-affected communities across Canada, participates in the environmental assessment of mining projects and works to reform outdated mining laws. http://www.miningwatch.ca/

Please join us as we celebrate the 2nd annual Indigenous Sovereignty Week in Ottawa, Oct27 – Nov4, 2010

The week is a part of a national grassroots initiative to build relationships and raise awareness about the issues and struggles of indigenous people that are often marginalized in Canadian society.

Full information is available on our ISW page, www.bit.ly/iswottawa
Or contact: ipsmo@riseup.net, 613-656-5498