Our Land Our Identity:

The Algonquins of Barriere Lake Fight for Survival

and Music by David and Aurora Finkle and Andy Mason.

A light meal will be shared.

“I am a survivor of a residential school. I don’t want that kind of life experience for my children. I want my grandchildren to have a face and a mouth that they will be proud of, not an empty face. I want them to have an identity. This is what we are fighting for.”
– Michel Thusky (from CounterPunch: Sustainable Colonialism® in the Boreal Forest)

Just a few hours up the Gatineau River from Ottawa is the Algonquin Community of Barriere Lake. Access to the forests lakes and rivers of their territory is a vital to this Algonquin community’s identity and for generations they have fought to protect it from destructive resource projects, while also finding ways to co-exist with Quebec and Canadian society. Though there have been many challenges, the language and traditions in Barriere Lake remain strong.

In 1991 the community signed a landmark and historic agreement with Canada and Quebec that should have created a process for co-management of their territory and modest revenue sharing with the community. As with many other agreements made with Indigenous peoples in Canada, Barriere Lake’s tri-lateral agreement has not been respected.

This summer, Resolute Forest Products, a logging company based in Montreal, has been clear cutting in an environmentally and culturally important area of the Barriere Lake’s territory without consultation and consent of the community. After 3 weeks of protest against the clear-cutting the community is going to court to assert their rights and jurisdiction to protect their land. They are asking for your moral and financial support! It is a difficult situation for the community since they have few financial resources.

“You know, this land is important to us, especially the people who harvest off this territory. Because right now they’re destroying a huge moose habitat, bear dens, sacred sites. They don’t care about the stuff that is out there, our medicine. And when the land is destroyed, we’re destroyed.
– Norman Matchewan (from Dominon Paper Issue #84: September/October 2012)

For background information about the Algonquins of Barriere Lake: http://www.barrierelakesolidarity.org/2008/03/resources.html and https://ipsmo.wordpress.com/barriere-lake-posts/.

This past month, two well-known people in our community – Grandfather William Commanda and Jack Layton – along with many more unknown heroes around the globe, went to the Spirit world. It is sad time for us but we know that they are in a peaceful place now. We send our love and prayer to all of their relatives and wish them strength to continue the work of these two men and countless others for peace. Grandfather and Jack had very different world views but they both spent most of their life working for their people. It is an honour to work for the people. 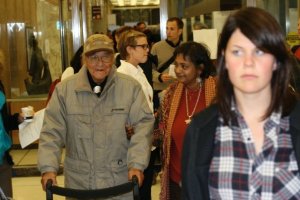 Grandfather William Commanda, the respectful spiritual leader of the Algonquin Nation, passed away on the morning of August 3. He would be 98 years old on November 11 this year! Ojigkwanong is the name his mother gave to him because he was born under the morning star. Even though Grandfather isn’t here physically with us anymore, he, like the morning star, will always look after us and lead us in a good way. We, the folks at this small grassroots group called IPSMO, had the honour to meet Grandfather three years ago.  Grandfather was one of our very first supporters for our work trying to learn and act in solidarity with Indigenous peoples.

On March 3, 2009, we had our first big event in the National Library and Archive. We screened the documentary “Invisible Nation – The Story of The Algonquin” and had Grandfather open the event for us. His Granddaughter, Claudette Commanda, was our special guest speaker. Grandfather’s presence was a big reason why close to 500 people showed up, overflowing the auditorium’s seating capacity and requiring the setting up of a second screen in the foyer! It was a big success and we did what we intended to do – creating an opportunity for native and non-native peoples, who’ve been separated by colonial measures like the reserve system, to get to know each other.

Six months later, Grandfather surprised us by coming to another big event we held – The Epidemic of Continuing Violence Against Indigenous Women, to raise fund for Maisy Odjick’s family. Maisy and her friend Shannon Alexander, both from Kitigan Zibi Anishinabeg, went missing on Sept 6, 2008.

And at the beginning of this year he was active in supporting the efforts to protect the Beaver Pond Forest and South March Highlands in Kanata.

Please read here for more: http://bit.ly/GWC-passing and for a tribute from Organizing For Justice, including links to many media articles: https://organizingforjustice.ca/?p=623

Jack Layton, another respectful man, passed away on the morning of August 22.  We did not know him well, to be honest. But, at our recent direct action to support the Algonquins of Barriere Lake in front of the Minister of Indian Affairís office on a cold December day, he surprised us by showing up and speaking to the crowd in support of Barriere Lake’s inherent right to self-determination and customary governance. We thank him and respect him for his support for Indigenous rights and other social justice issues. RIP Jack.

To continue the legacy of these two great men and countless others, please continue supporting our solidarity work.  Here is how:

The Algonquins of Barriere Lake have been forced into a costly legal battle with Canada to protect their land rights. They cannot succeed without your support.

Please donate! You can either make checks out to “Indigenous Peoples Solidarity Movement Ottawa” with “Barriere Lake Legal Defense Fund” in the memo line, or through PayPal – http://bit.ly/barrierelake.  Everything counts. Please give what you can.

For details on Barriere Lakeís legal battle and where to mail your cheque, please go to our previous post: https://ipsmo.wordpress.com/2011/08/17/barriere-lake-legal-defense-fund.